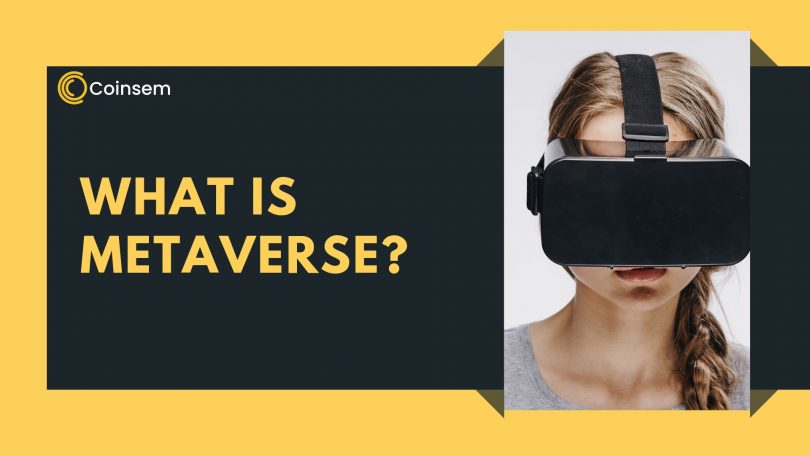 Mark Zuckerberg is betting the future of Facebook on Metaverse.

In a letter to his employees, Mark Zuckerberg explained that the next chapter of the internet is metaverse, and to reflect this, Facebook was renamed as Meta.

Less than a week later, Microsoft announced its new product that lets users navigate virtual workspaces in the form of avatars, creating a metaverse-like experience.

But what is metaverse?

The Origin Of Metaverse

The word ‘metaverse’ is a blend of the Greek word ‘meta’ (that means after or beyond) and the English word ‘universe.’ Its first origin is seen in Neal Stephenson’s 1992 science fiction novel called Snow Crash which was written a year after the internet was born.

In the novel, characters move in and out of a place called Metaverse that appears as a 3-dimensional urban environment built on code. Access to the metaverse was through high-quality virtual reality google (similar to the modern VR headset) or low-quality public terminals in booths.

The metaverse is a concept of a persistent 3-dimensional online universe that connects multiple platforms. The idea is to let users work, learn, game, socialize, and transfer assets across multiple online worlds with a first-person experience.

While a single unified metaverse is not fully in existence, some platforms contain metaverse-like elements.

For instance, Decentraland is an online world where users can own virtual real estate (through its cryptocurrency, MANA), socialize, and participate in the development of the platform.

In 2020, Travis Scott held a virtual in-game music concert on the multiplayer game Fortnite, with over 12 million players participating.

How Is Blockchain Related To Metaverse?

Apart from gaming and socializing, metaverse will require decentralized governance, economy, proof of ownership, and transfer of assets. As seen in other metaverse-like platforms, blockchain technology has implemented a way on how these can operate:

According to the Economist, the total value of fakes sold worldwide each year go as high as $1.8 trillion, causing losses for producers, consumers, insurance companies, and the economy.

With blockchain technology, every transaction created is recorded on a distributed ledger and remains immutable. To prove that you own real estate in the metaverse or that a token belongs to you, all you need is a transcript of your transactions on the blockchain or the private key to the wallet that stores the token. None of which can be hacked.

Metaverse would require a way to allow users to buy, sell, and transfer assets between platforms and for these assets to be valuable in the real world. Currencies on blockchain technology are more secure and valuable than in-game currencies.

Metaverse will require a system for governance. Blockchain technology already provides a fair and decentralized decision-making process. Metaverse will also need to implement decisions made in a way that users trust. Blockchain has a proven way of doing this.

As a single unified online universe, metaverse will require the various platforms to be compatible. Users should be able to move between platforms with their assets. Blockchain projects like Polkadot allow for compatibility with other blockchains.

Since metaverse will be a growing system where users can create and develop in-world assets, blockchain technology is the right fit for this compatibility.

Metaverse will need to manage the online identity of users and finance. Blockchain technology already proves that finance can be decentralized and accessible to anyone around the world.

READ ALSO:   Unlock the Secrets of Pi Mining: Discover the Ins and Outs of the Pi Network!

Other Technology That (Will) Power Metaverse

For instance, if you want to buy a sofa but can’t tell if it fits the design of your house you can point your smartphone (that contains AR technology) towards the space you want to put the furniture in.

The AR technology superimposes the computer-generated image of the sofa on the space in your houses allowing you to see how the furniture will look if it was in that space.

With the concept of metaverse mirroring the real world, some believe it would be an augmented reality environment accessed via see-through lenses.

VR is a computer-generated environment (that can be similar or different from the real world) with scenes, objects, and characters that appear as 3-dimensional making users feel immersed in the experience.

VR technology can expand the metaverse experience to include physical simulations where users can feel, hear, and interact with other users as they do in the real world.

How Is Cryptocurrency Related to Metaverse?

In the real world, we transact with fiat currencies that act as a means of exchange and storage of value.

In the metaverse where real-life activities like trading, working, gaming, and socializing will exist, there is a need for currencies by which people can make transactions and store value.

Cryptocurrencies form the foundation of the digital economy of the metaverse.

Originally built as a mobile gaming platform in 2011, the blockchain version of Sandbox was built by Animoca Brands in 2018.

Sandbox is an Ethereum-based metaverse and gaming ecosystem that allows players to build, own, and monetize their in-game creations as NFTs.

In 2021, Sandbox raised $93 million in funding and secured over 50 partnerships including Cryptokitties, Atari, and Snoop Dog. Its alpha version was launched in November 2021.

How Does Sandbox Work?

The sandbox allows players to build their own NFTs (which could be avatars, visual objects like swords or wearables, and games) using VoxEdit and Game Maker. Players have absolute ownership over their creations.

The NFTs created can be monetized by trading on Sandbox Marketplace or used in interaction with other players.

VoxEdit is a user-friendly software on Sandbox that lets players create 3D objects to enhance the gaming experience. These objects are referred to as ASSETS, which could be environmental assets like buildings or objects attached to the avatars like clothing or weapons.

Assets can be exported to the Sandbox marketplace and traded as NFTs.

Game maker is a program that lets players build 3D games on the Sandbox metaverse with no coding knowledge.

Players can build their version of games on a parcel of LAND ( a digital real estate on the Sandbox platform that can be bought or rented) and organize assets created from VoxEdit to improve the game.

Sandbox marketplace is an NFT marketplace where players can trade their in-game assets with SAND (the native cryptocurrency of Sandbox).

How To Generate Revenue in Sandbox

1). By selling your assets in the Sandbox marketplace for SAND. Depending on the type of asset, price ranges from as low as 10 SAND to thousands of SAND.

2). You can create games using the Game Maker program and earn SAND as other players use it or earn rewards as a player on other users’ games.

READ ALSO:   Cardano - All You Need To Know

3). You can rent your LAND to other players and earn SAND for it.

SAND can be traded for other cryptocurrencies on exchanges like Binance.

Decentraland is a metaverse built on Ethereum blockchain that enables users to socialize and buy lands on which they can build their micro-world.

Decentraland is owned by its users and governed by a decentralized autonomous organization (DAO) that consists of holders of MANA, LAND, and Estate.

How To Generate Revenue On Decentraland

Decentraland has 3 tokens that fuel its economy: MANA, LAND, and Estate.

MANA is an ERC-20 token that can be exchanged for other fungible tokens like Bitcoin. It is the native cryptocurrency of the Decentraland through which users buy LAND and accessories for their avatars.

With the future of metaverse looking promising, investors can buy and hold MANA.

LAND and Estate are ERC-721 tokens also called NFTs. They do not act as currencies (like MANA) but are used to mark unique assets like parcels of digital land, avatars, or wearables.

LAND can be sold in the Decentraland marketplace for MANA which can be traded for other cryptocurrencies on crypto exchanges.

Decentraland has a fixed quantity of 90,000 properties. Like real estate, their value is expected to go up.

You can create wearables for avatars and sell them in the Decentraland marketplace as NFTs.

Bloktopia is a metaverse built on the Polygon network. It consists of a 21-floor virtual skyscraper that honors Bitcoin’s maximum supply of 21 million. Holders of Bloktopia native token BLOK, are called Bloktopians. This project is set to launch in 2022.

Bloktopia will provide users access to educational tools on blockchain technology and crypto.

How To Generate Revenue on Bloktopia

1). By purchasing a virtual property. Floors on the skyscraper can be bought and later sold or leased for BLOK tokens.

2). By holding BLOK token. With the growing interest in the metaverse, the price of metaverse tokens like BLOK is set to rise.

Enjin is an Ethereum-based metaverse and social gaming platform that focuses on the creation and hosting of virtual items (NFTs) used as in-game elements. Enjin solves the problem of liquidity of NFTs.

An Enjin NFT is made up of Enjin coins, to provide instant liquidity, the NFT can be melted back to ENJ coins that can be traded on crypto exchanges. As long as the price of ENJ coins does not reach zero, there would always be value for its NFT.

How To Generate Revenue on Enjin

Conclusion: The Future Of Metaverse

While a unified metaverse is not fully in existence, we see advancements that indicate we are evolving there.

Real estate in various metaverse platforms are sold for millions of dollars, some companies are opening virtual offices, and artists like Travis Scott are hosting concerts on metaverse-like platforms.

Investment in any metaverse stock or coins should be done only after proper research.

If you are new to the crypto space, you would find our beginners’ guide helpful.