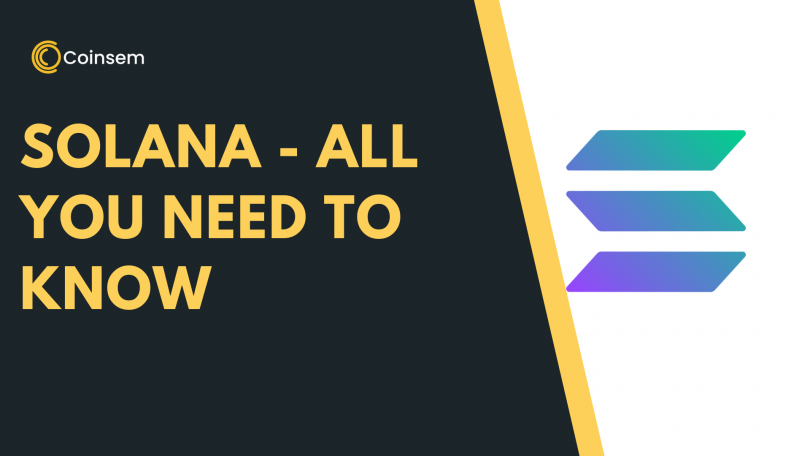 Solana, considered as Ethereum’s closest competition is described by its creators as the fastest blockchain in the world with the fastest-growing ecosystem in crypto. It processes over 50,000 transactions per second and produces a new block in 400 milliseconds compared to Bitcoin which produces a new block every 10 minutes and Ethereum between 10 to 15 seconds.

Solana is currently the fastest blockchain. It was built by developers at Solana Labs (located in San Francisco) and maintained by the Geneva-based Solana Foundation.

This guide breaks down what Solana is, what makes it one of the most talked-about blockchain technology, and if it’s worth the hype.

Solana is both a cryptocurrency and a blockchain network.

This network prides itself on its ability to perform a higher transaction, maintaining low fees and without sacrificing its decentralization.

To appreciate what Solana is, it is important to have a knowledge of the blockchain structure of other cryptocurrencies and how Solana is a deviation from it.

In Ethereum 2.0 proof-of-stake structure, validators are required to stake coins. The higher the number of coins staked by a validator, the more likely they are to be chosen by the network to close an old block and open a new one.

The common feature between these two structures is that they are both consensus mechanisms, meaning that all nodes in the network are synchronized together and need to agree on transactions before they can be validated. This delays the network.

Solana’s proof-of-history structure is an advancement of both structures that allow each validator to confirm node transactions by proving that a transaction occurred at a specific moment in time.

Instead of all validators communicating with each other to agree that time has passed and that transactions were accurate, each Solana validator maintains its clock by encoding the passage of time in simple SHA-256.

Block time is a measure of the time it takes to produce a new block in a blockchain network.

Bitcoin produces a new block every 10 minutes, for Ethereum it is between 10 to 15 seconds, Libra around 10 seconds, for Solana it’s 400 milliseconds.

This means that the time Libra takes to confirm 1 block, Solana has confirmed 25 blocks by 25 different validators.

With optimized block time, Solana can confirm 50,000 transactions per second by a network of 200 physically distinct nodes.

SOL is the token used as the means of exchange in the Solana network. It was listed on Coinbase on June 17, 2021.

The proof-of-history technique was first described by Solana for use in blockchain in 2017. In June 2018, a Stanford University paper described a similar technique called verifiable delay function (VDF).

The Solana foundation states that Solana is not a VDF as it cannot serve as a good source of randomness whereas VDFs can.

Also, a desirable property of VDFs is their very fast verification times. For Solana, verification of its delay function is proportional to the time it took to create the function. This is algorithmically slow and shouldn’t be considered a VDF.

Who are the founders/team behind Solana?

Solana Labs began fundraising to build its crypto network in the 2nd quarter of 2018. The team raised $20 million between April 2018 and July 2019. By March 2021, the team raised $1.76 million in a public token auction hosted on CoinList. Solana has raised a total of $335.8M in funding over 6 rounds.

What Problem Is Solana Solving

i). The Scalability Problem: Scalability Is the ability of cryptocurrencies to cope with large numbers of transactions per time.

If the influx of transactions becomes much more than this, the network would not be able to handle the traffic. This can lead to a temporary blackout of the network or cancellation of the entire transaction queue.

The scalability problem is all about timing. Solana suggests that to solve this problem each node needs its internal clock.

Instead of nodes competing to solve mathematical puzzles to confirm transactions (as seen in Bitcoin), they only need to agree that one event took place before the other.

Solana achieves this timing sequence by its proof-of-history protocol which encodes the passage of time into its blockchain, proving that a certain event occurred at a specific time before or after another event.

Given that Solana is not dependent on consensus mechanisms, there is a need for another technique that can help transmit blocks through the network. Turbine is Solana’s block propagation protocol.

As a block is streamed, it is broken into small packets (along with erasure code) which are fanned out across random nodes.

Sealevel helps the network process thousands of smart contracts at once by using a parallel transaction execution.

In Solana architecture, every validator knows the order of upcoming leaders. Gulf stream pushes transaction caching and forwarding to the edge of the network. This helps validators forward transactions to leaders ahead of time.

Validators can execute transactions ahead of time, reduce confirmation time, and reduce pressure from the I confirm transaction pool.

Is It Truly Decentralized

Decentralization is the transfer of control and decision-making from a central entity to a distributed network.

Most cryptocurrencies are considered decentralized because they are built on blockchain technology which is a decentralized network that is open source(d). The network allows many participants referred to as miners (as in proof-of-work) or validators (as in proof-of-stake) who are stationed at different geographical locations to join in validating data. This ensures the security of the network.

As of September 2021, Solana had 1,060 validators across the world, keeping the network open, decentralized, and secure.

Solana allows the creation and publishing of decentralized applications (Dapps) on its network.

Decentralized finance (Defi) that allows users to borrow, lend, save, and receive interest on cryptocurrencies with the control of a (single-entity) third party outlet like a bank can be launched on the Solana network.

For instance, Chainvote is a decentralized finance voting app for corporate governance built on the Solana blockchain. This app uses SOL tokens to vote.

Where Is It Listed?

Listing in crypto shows that a currency has passed the exchange market requirement and is ready to be traded on.

Solana was listed on Binance in April 2020 and on Coinbase in June 2021. It is also listed on BitFinex and OKEx.

SOL is listed for exchange with fiat currencies like USDT, USDC,  and

How And Where To Buy Sol

This is after doing your research on the coin. SOL is available on Binance, Coinbase, BitFinex, and OKEx.

Choosing a platform also depends on your location. In countries where the purchase of cryptocurrencies from banks is restricted, one would have to use peer-2-peer trading.

If you are looking to HODL SOL for a long time, consider using offline wallets like paper wallets.

Create an account on the chosen platform by providing some personal data like name, location, and sometimes National Identity Card or BVN.

It is also necessary to verify your account and set up 2-factor authentication. This provides tighter security to your account.

For countries where the purchase of crypto is not restricted, SOL can be bought directly via bank transfer or with your debit/credit card.

Platforms like Binance have enabled a peer-2-peer buying option that lets users in crypto restricted countries post advertisements to buy or sell crypto and pay or receive cash for the transactions offline.

How To Stake SOL

Staking SOL tokens helps to secure the network while offering rewards to those who stake them.

Staking on the Solana network occurs in the form of a shared-risk shared-reward financial model where owners of SOL (referred to as delegators) delegate their tokens to a validator (who processes transactions).

There is a risk of losing tokens while staking in a process called slashing. If a validator tries to cheat the network by creating invalid transactions or censoring certain types of transactions, the network responds by destroying a portion of the validator’s delegated stake (tokens). This leads to immediate loss of token by the delegator and future loss of reward for the validator.

There are 4 steps involved in staking SOL:

Not every wallet supports staking operations. Supported wallets include:

In some stake accounts like Binance, Exodus, and FTX users cannot choose a validator. They assign users to their partner validator.

Each supported wallet has instructions on how to delegate state to a chosen validator.

How To Store SOL

The keypair is made up of public keys and private keys.

The public key (also known as pubkey) is the wallet receiving address. Depending on the blockchain, it can be used to view crypto balance. It cannot alter anything on the wallet or withdraw the token. It is safe to share this key publicly.

Private keys prove the user’s ownership of the wallet and cryptocurrencies. It is used to initiate and sign transactions.

It can be in the form of QR codes, Mnemonic phase, 256 characters long binary code, or 64 digit hexadecimal.

Depending on the kind of wallet, losing the keypair can lead to permanent loss of access to all cryptocurrencies attached to it (as in non-custodial wallet) or they can be retrieved (as in custodial wallet).

For new users, Solana Foundation recommends the use of app wallets or browser-based web wallets. For advanced users and developers, they recommend a command-line wallet.

This is not financial advice; the future looks pretty good for Solana. Although relatively new to the crypto market, this coin is set for the moon. It’s also worthy to note that some things might get messy since it’s still in its early days. It’s still in the beta stage.