After FTX debtors announced the discovery of $5.5 billion by administrators during an investigation, former FTX CEO Sam Bankman-Fried (SBF) shared a blog post from his Substack newsletter on Twitter. In it, he stated that the presentation published by litigation firm Sullivan & Cromwell is “extremely misleading” and that FTX US is solvent and “always has been.”

In response, SBF posted a new blog on his Substack newsletter and stated on Twitter, “FTX US is solvent, as it always has been.” The blog post echoes this statement and claims discrepancies between Sullivan & Cromwell’s (S&C) reporting and SBF’s spreadsheet, supporting the argument that FTX US is solvent.

He disputes the assertion in the presentation that FTX US has a “shortfall” and maintains that FTX US is not insolvent. “S&C claims that FTX US has a shortfall,” SBF said in his latest blog post. “That claim is false. Based on S&C’s own data provided in the same court presentation, FTX US had roughly $609 million of assets ($428 million in bank accounts, plus $181 million in tokens) backing roughly $199 million in customer balances. FTX US was solvent when it was turned over to S&C, and almost certainly remains solvent today.”

Despite SBF’s claims, several people on social media criticized the FTX co-founder and specifically criticized his Excel spreadsheet. “Bro typed out a couple of numbers in 5 mins thinking it’s gonna be his get out of jail free card,” one person tweeted in response to SBF’s latest blog post. “Nice Excel sheet that a 5-year-old could make — LOL — Means nothing. Somebody shut this dude up forever,” another person wrote. SBF’s claims were met with skepticism and his declarations did not appear to be convincing to many. 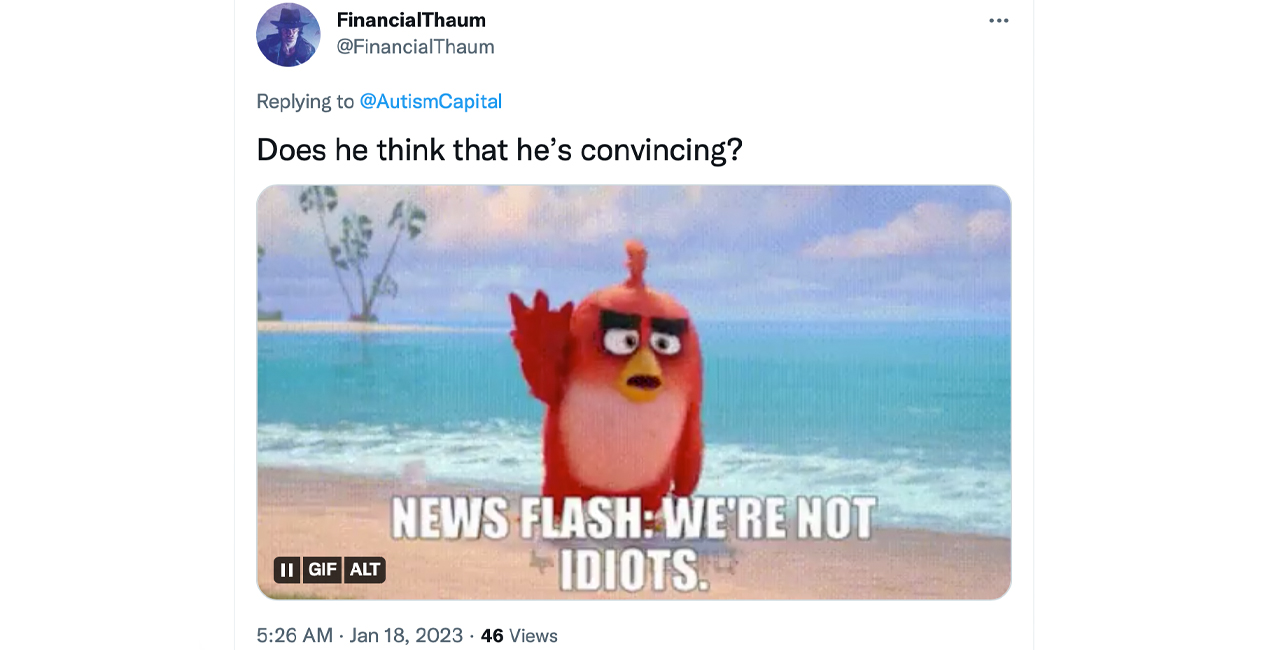 Former FTX CEO yet to address unresolved issues of missing funds, lack of auto-liquidation, and a controversial FTX US redemption system

Many have questioned why SBF has not addressed the missing $10 billion funds in his statements. His latest blog post also fails to address the accusations made in the presentation by FTX debtors. For instance, following his previous blog post, Bitmex co-founder Arthur Hayes criticized SBF for not addressing the lack of auto-liquidation associated with Alameda Research.

The recent presentation by FTX debtors claims that a small group of individuals, including Alameda Research, had the ability to remove assets from the exchange without it being recorded on the company’s ledger. These assets were allegedly taken from FTX exchange customers. SBF did not comment on this issue in his blog post.

SBF did not address that specific subject at all, it is absent from his argument against Sullivan & Cromwell’s presentation. People on Twitter brought this up to SBF on other Twitter threads about the subject, as SBF’s tweets are set to “private” mode and cannot be commented on.

“This does not explain the allegations of embezzlement to which your colleagues have pleaded guilty,” one person on Twitter tweeted in response to SBF’s latest claims. Some have suggested that SBF’s claims appear to be intentional “misdirection” and “potentially for legal/defense purposes.”

It seems that Bankman-Fried’s claims in his recent blog posts are not being received well by the public, with many criticizing his use of an Excel spreadsheet as evidence. Some speculate that he may be disregarding legal advice in making these statements.

The latest blog post does not address the various concerns raised by his colleagues, including former Alameda CEO Caroline Ellison and FTX co-founder Gary Wang. Additionally, there is emerging evidence of potential misuse of FTX US’s redemption system for Solana-bridged assets.

According to Conor Rogan, a director at Coinbase, the redemption scheme used by FTX US could complicate the bankruptcy process. Rogan stated that from November 9th until withdrawals were halted, traders may have used the redemption system to funnel large sums of money out of the exchange. He also mentioned that this could further call into question FTX-FTXUS separation claims.

Rogan discussed a synthetic Solana-based bitcoin (BTC) token called “sollet (soBTC)” which broke its peg when FTX’s troubles were engulfed in flames. Despite the financial issues, FTX US still processed sollet redemptions on a 1:1 basis.

The redemptions still occurred while sollet was trading for much lower than BTC’s spot price, and Rogan believes the “toxic redemptions” or “swapping unbacked ETH and BTC” led to the potential loss of over $40 million. “FTX US would presumably have 1,700 real BTC, instead of 1,700 soBTC worth near-zero on the open market today,” Rogan tweeted. The onchain researcher noted, however, that the evidence was his own “speculative findings based on research into FTX US’s Solana address and discussions with members of the Solana community.” Notably, following Rogan’s Twitter thread, SBF decided to reply to the claims made.

“I’m fairly confident that FTX US’s excess cash on hand is much larger than the size of the wrapped asset issue to the extent there is one,” SBF wrote in reply to Rogan’s Twitter statements.

SBF’s statements regarding the sollet (soBTC) issue faced skepticism and criticism once more after he published the tweet. One person asked the FTX co-founder, “You just said they were solvent. Now you’re ‘fairly confident?'” Another individual tweeted, “I’m fairly confident you will spend a long time in federal prison.” The reactions to Rogan’s Twitter thread and SBF’s response show that many people are not accepting the former FTX CEO’s statements. As one person replied to SBF’s sollet commentary on Twitter, “Nobody believes anything you say and they never will.

I'm fairly confident you will spend a long time in federal prison.