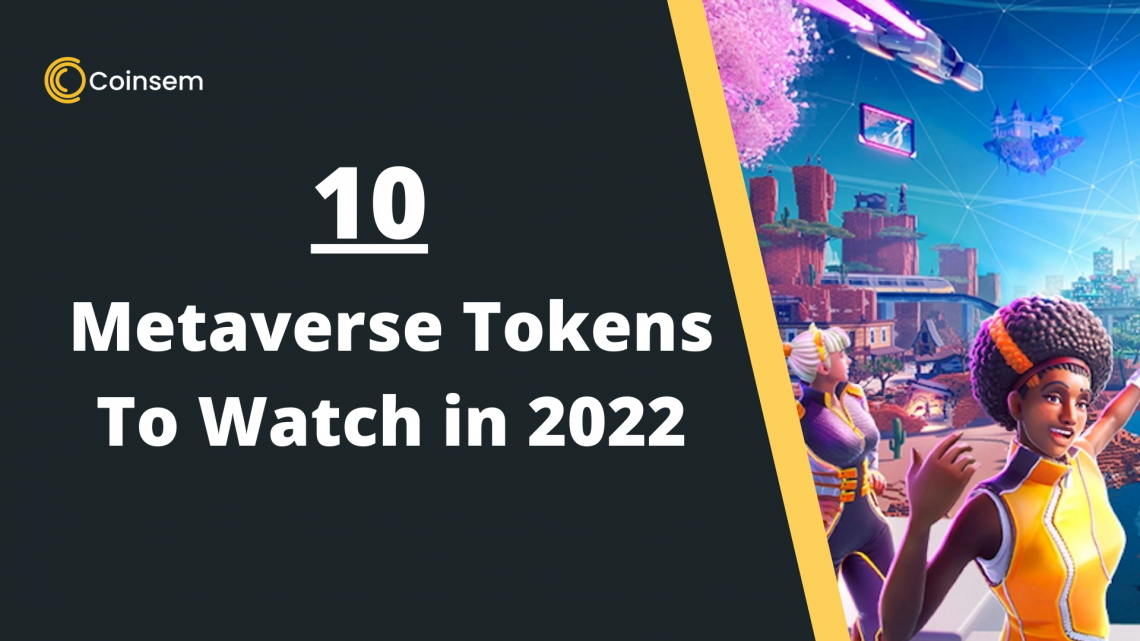 To maintain the economy of the metaverse, there is a need for currencies that can act as a means of exchange and storage of value.

We’ve written all about the metaverse and why you should care.

Some of these tokens are governance tokens that allow holders to vote policy updates of the platform, some represent in-game assets like LAND in Decentraland and ASSETS in Sandbox, while others are used to make digital transactions like buy wearables for avatars or purchase fan tokens for sports teams.

Here is a list of 10 metaverse tokens, their tokenomics, and price prediction.

Axie Infinity was developed in 2018 by the Vietnam-based company, Sky Mavis.

$AXS holders can earn rewards by staking $AXS tokens, playing games, or participating in the governance of the ecosystem.

$AXS has a total supply of 270 million AXS tokens with a circulating supply as of October 2021 at 60 million AXS.

$AXS can be exchanged for other cryptocurrencies on major exchanges like Binance, OKEx, and Huobi.

$ENJ is an ERC-20 token built on the Ethereum blockchain and fuels the Enjin platform that lets users create, distribute, and trade virtual assets.

$ENJ backs the value of every asset built on the Enjin platform, this provides real-world liquidity to in-game items.

A required amount of ENJ token is needed to mint virtual assets on the platform, this amount is removed from the creator’s wallet and locked within the assets they create.

The assets can be converted back to ENJ coins at the exchange rate when they are produced.

Enjin is a growing project that was first launched as a gaming platform in 2009 by Maxim Blagov and Witek Radomski, with the blockchain version going live in 2018.

$BLOK is an ERC-20 token built on Polygon, a layer-two scaling solution of Ethereum.

It is the native token of Bloktopia metaverse, a 21-floor virtual skyscraper (built in honor of Bitcoin’s maximum supply of 21 million BTC) that focuses on providing users access to learning tools on cryptocurrencies, scaling revenue from play-to-earn games, DeFi, selling and leasing of real estate, providing socializing opportunity through virtual events and in-built games, and allowing users create in-game assets.

$BLOK can be used to purchase properties in Bloktopia, advertise, or vote in the metaverse governance.

$BLOK was co-founded by Paddy Carroll and Ross Tavakoli in 2021.

$BLOK can be traded in exchanges like Gate.io, OKX, Bitget, and Kucoin.

$MANA is an ERC-20 governance token of Decentraland. Decentraland is a metaverse built on Ethereum blockchain that lets users socialize and buy LANDs on which they can build their micro-worlds.

As the governance token, holders of $MANA can vote on policy updates of the platform. Owning MANA also lets users purchase LANDs, customize avatars, create wearables for avatars, and sell them in the Decentraland marketplace as NFTs.

$MANA used to purchase LANDs are removed from circulation, this creates scarcity of the coins and increases the price of $MANA.

$MANA was co-founded by Ariel Meilich and Esteban Ordano in August 2017.

$MANA has a maximum supply of $2.1 billion MANA tokens and a circulating supply of 1.3 billion MANA. It is primarily used as an in-game currency.

MANA can be traded on major crypto exchanges like Coinbase, Binance, OKEx, and FTx. It can be swapped for other tokens on Coin98.

$SAND is the ERC-20 governance token of the Sandbox ecosystem. Sandbox is an Ethereum-based metaverse gaming platform that lets players build, own, and monetize their in-game creations as NFTs.

In 2021, Sandbox raised $93 million in funding and secured over 50 partnerships including Snoop Dog and CryptoKitties.

The first version of Sandbox was released as a mobile game in 2012 by Pixwol and the game developer Onimatrix.

In 2018, Pixwol was acquired by Animoca Brands who built the blockchain version.

$SAND has a maximum supply of 3 billion SAND and a circulating supply of 922 million SAND.

$SAND token can be traded on Binance, Huobi, and Bitmart.

$ALICE token is an ERC-20 governance token that powers the builder game My Neighbor Alice (MNA).

MNA is a multiplayer farm and builder game built on Ethereum blockchain which features complex islands that can be bought by $ALICE token holders and developed with in-game assets.

My Neighbor Alice lets users borrow and lend their in-game assets (NFTs) to other users as well as stake their $ALICE tokens for yields.

As the governance token, $ALICE holders would be able to vote on policy updates through a Decentralized Autonomous Organization (DAO).

MNA was created by the game development company Antler Interactive in January 2021. The first playable test was conducted in August 2021 with the full game version set to be released in 2022.

$ALICE was launched on the Binance launch pool in March 2021.

Chiliz token ($CHZ) is both an ERC-20 token built on Ethereum blockchain and a BEP-20 token on Binance smart chain.

These fan tokens help fans play an active role in their favorite sports teams by giving them voting power In the teams’ decisions like the location of friendly matches, goal celebration songs, and which player wins the player of the game.

$CHZ was founded in 2012 with the first token for the  Italian soccer team Juventus ($JUV), released in late 2019.

$CHZ is available on major crypto exchanges including Binance and Coinbase.

Monsta Infinite ($MONI) is a BEP-20 governance token of Monsta Infinite game which is an NFT play-to-earn game built on the Binance smart chain and inspired by Axie Infinity.

This game solves the problem of unfair competition in player versus player games by closing the gap between the rich and poor players. Players are matched based on their rank, skill level, and recent match result.

As the governance token, $MONI holders would be able to participate in governance votes, stake their tokens, and play games.

Monsta Infinity is being built by 11 professionals from Singapore and Malaysia with Jin Tan as CEO and Chong Hor Kong as CTO.

The first sale of $MONI coins went live in September 2021 and the game launch is scheduled for the first quarter of 2022.

Wallet Investor predicts that $MONI is a high-risk long-term investment with the possibility of the current price of $0.425 devaluing in the future.

$REVO is a BEP-20 governance token built on Binance smart chain that powers the Revomon platform.

Revomon is a monster-hunting metaverse game where users train monsters, go on quests, compete with other players, and unlock achievement while interacting with virtual reality through real-life gestures.

Revomon combines virtual reality with NFT: players can collect over 150 Revomon (monsters) while having true ownership of the monsters they train.

As the governance token, holders of the $REVO token can participate in the decision-making process of the platform, stake $REVO in the Revomon liquidity pool, and buy items with which they can engage in quest.

$REVO was launched in April 2021 with its first alpha version published in June 2021. Its mobile version is scheduled to be released in the first quarter of 2022.

$REVO is available on Pancakeswap, Gate.io, and CoinTiger.

Holders of $TOWER can participate in the governance of the Crazy Kings Franchise (consisting of Crazy Kings game and its sequel Crazy Defense Heroes) by submitting proposals and voting on these proposals.

$TOWER was created by Animoca Brands (who are also creators of the Crazy Kings Franchise).

In June 2021, Animoca Brands partnered with CoinMarketCap to give out 600,000 Tower tokens.

With Facebook changing its name to Meta and various tech and entertainment personnel opening virtual offices and hosting events in the metaverse, the hype around metaverse tokens and what they can yield for investors is on the rise.

Investment in any metaverse token should be done only after proper research.